Tennessee is the name of the Pre-War state which was part of the East Central Commonwealth. It bordered with Kentucky and Virginia to the north, Missouri to the northwest, Arkansas to the southwest, North Carolina to the east and Mississippi, Alabama and Georgia to the south. It was nicknamed as the 'Volunteer State', and was the 16th state to join the United States of America on July 1, 1796. 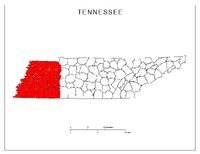 The western part of the state, especially near the Arkansas border, is marked by the several, often quite large swamps filled with mutated critters. Everything located in the lowlands of the Mississippi River is considered to be part of Western Tennessee.

East Tennessee was comprised of 33 counties and roughly consists of 1/3 of the state's total area. Even with the East being the initial point of settlement in the 1760s, with the Northeast towns centered around Elizabethton forming the Watauga Association in 1772, the East always remained the least populated due to the Appalachian Mountains forming a natural barrier and disadvantage to the population of the area. However, the mountains would be a blessing in disguise as they often contained valuable ore and coal while also provided a lush forest full of timber and creatures ready to be exploited. Along with this supply, the Tennessee River and its countless tributaries formed a rich area for natural resources and food. Between the Great Smoky Mountains and the Cumberland Plateau rested the Tennessee Valley, where the aforementioned river snaked its way towards Alabama. Here, arable land was plenty and many farming towns sprang up. After the Great War, the river provided a veritable breeding ground for mutated creatures and the Appalachians and Cumberland Plateau would provide a shield of sorts, preventing easy contact with the rest of the former United States of America.

"Believe me, Florida has been greatly overrated. One acre of our fine Tennessee land is worth a thousand here"
―Rachel Jackson

Retrieved from "https://falloutfanon.fandom.com/wiki/Tennessee?oldid=159668"
Community content is available under CC-BY-SA unless otherwise noted.