Texas is the eponymous state of the Texas Commonwealth and the 28th state to be admitted into the United States of America. 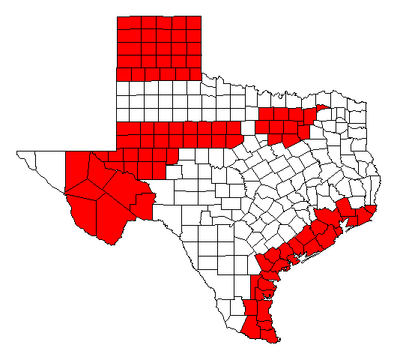 With the last census being from 2070 and the nuclear holocaust of 2077, there is no accurate census in 2281 but it is believed the human population ranges from a several-hundred-thousand to possibly a few million. The swamper population is sensibly estimated to be ten-thousand or so. Ghouls are believed to be in the tens-of-thousands and the current super mutant estimations are unknown but have been seen en masse on rare sightings, this is also true for other human mutations such as trogs (although trogs specifically are isolated to the Pitt).

Texas, before and after the Great War, was (and still is) a crucial cog in America's economic system.

Before the Resource Wars Texas was one of the largest producers of petroleum in America, second only to Alaska. However, a documentary was released in 2052 showing the general public how dry the oil fields had run and revealed how deep the energy crisis was.

After the Great War Texas greatly fueled the slave trade with Mexico, both selling and buying. And although horses went extinct in America, they can be found at the ass-end of Central America and one famous cattle drive forever known as The Great Nicaraguan Cattle Drive traded many of these horses and were brought back to Texas. Both the slave and horse/cattle trade is alive and expanding as of 2281. Both of these have created their fair share of problems along with money, such as the morality of slavery and the constant range-wars over herding turf and claiming more cattle. Drugs, guns, chems, and distilled liquor are also widely traded in Texas--although they would be considered minorities compared to the raw numbers of cattle and slaves driven annually.

The Great War ended the use of US Dollars and several forms of currency were used after that in the gigantic state of Texas. Armory Scrip, 5.56mm rounds, indentured service, simple trade, and bottle caps are common currencies found in Texas. In the southern and central parts of Texas were brahmin driving is a way of life, brahmin themselves have been known to be used as currency is land deals or other major transactions.

Before the bombing of 2077 Christianity was the majority religion in Texas. After the war however, religious views changed in some parts. While Christianity is prevent throughout in the southern border with Mexico and the north-eastern tip along the Louisiana border in the form of Catholicism, Christianity is largely scattered throughout most of Texas.

In the wake of the Great War religion did not end, in fact, religion had widely diversified because of the world event. In the backwoods deadly coastal swamps of Corpse Coast and the hellspring of Dallas lie many unique cults ranging from the restoration of one-headed cows to scouring for skulls in the hopes of eternal rest. In more mild tones the Rocker Movement- who's goal is to preserve music (most rock'n'roll)- is also prevalent in most of western and mid Texas and possibly parts of New Mexico and Mexico.

“Never forget, son, when you represent Texas, always go first class.”— James A. Michener
“If I owned Texas and Hell, I would rent Texas and live in Hell.”— General Philip Henry Sheridan
“You may all go to Hell, and I will go to Texas.”— Davy Crockett
“Some folks look at me and see a certain swagger, which in Texas is called 'walking.'”— George W. Bush
Community content is available under CC-BY-SA unless otherwise noted.
Advertisement