Whatever name the Eldest had in his smoothskin days is gone. This wheelchair-bound ghoul has been carted around Texas by various caretakers like some living collector's item. He generates interest for his stories and for his extreme age (possibly the oldest living being on Earth, certainly in Texas). His mind is a curious thing: frequently silent and senile, he sometimes "turns on," becoming lucid and remembering nearly everything he ever heard in his 300+ years. In these phases which rarely last longer than a few days or weeks he is a repository of tales of the Old and New worlds.

The Eldest's real name is lost to history (or so he claims) but he remembers his childhood in Arden, a flyspeck that had been considered a ghost town (indeed when it was considered at all) years before he was even born. His parents had a small ranch and supplemented their income with other work in nearby San Angelo. The Eldest helped around the homestead with chores and spent his free time hunting, hiking the wilderness, or tramping around the abandoned buildings in his tiny town just as men would regularly do centuries later. As a young man he attended Angelo State University where he majored in History and played football for the ASU Rams as a Safety. Though he did well enough as ASU, he was a bit of a loner and when he graduated he opted to return to Arden, more abandoned than he left it, content to help his aging parents.

By the time his parents had passed on, Arden's population could be counted on one's extremities, so he decided to hit the road. He had a long, storied career as a trucker. Life on the road appealed to him, so even on his time off he stayed mobile with a motorcycle or camper as his whims commanded. After thirty-five years on the nation's highways and byways he returned to the San Angelo area to settle in. He lived in relative solitude, sometimes visited by his friends that were still on the roads, but when the oil shortages became prohibitive these visits became more infrequent. Having never married, he simply kept himself busy taking care of his home. He was sitting on his porch when the Great War transpired, listening to the horrifying last broadcasts on his radio and watching the distant mushroom clouds in San Angelo in resignation. He thought he had been at a safe distance and never considered that he was being dosed with above-lethal doses of radiation. Perhaps it was his remarkable good health and stamina, even in his Nonagenarian years which allowed him to survive and transform into a ghoul, it's not something he has ever understood. The transformation seemed to invigorate him a bit so he packed some of his belongings and began to travel.

Though initially invigorated by his new super-irradiated state, his body did not stand up to the rigors of his traveling lifestyle and he eventually had to stop at some small, nameless survivor camp. He befriended an open-minded youth with whom he shared stories of the old days. The kid was interested in traveling and so he persuaded the Eldest to resume his travels with his aid. This boy would become the first of the Eldest's caretakers. They sought out other communities, paying their way with stories and odd jobs. Eventually the youth grew up and wanted to settle down, he found a trustworthy person to resume his responsibilities with the Eldest's blessings. And so it went on for decades: losing caretakers to age or violence, seeking out a new companion to help him on his way, sharing his stories and learning the stories of the people he encounters. 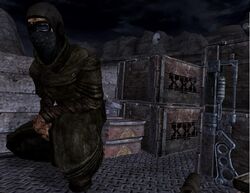 The Eldest is a rail-thin ghoul. His leathery skin is drawn tight across his body and his bones and musculature are clearly visible at his joints. He is completely hairless, lacking even eyelashes. Because of the fragility of his eyelids, he keeps his eyes closed at all times. He still has most of his teeth, which are plainly visible through his perpetual rictus-grin. He wears a simple hooded robe and welder's goggles and he smells like an old wallet. His clawed hands are almost perpetually dug into the armrests of his wheelchair.

The Eldest is extraordinarily resilient for a decrepit ghoul, having been in good health throughout his smoothskin days and surviving ghoulification. His luck is also legendary, he's survived the wasteland even though he is not ambulatory and is practically blind. Age has rendered him very weak and stiff, so he can no longer walk unassisted, he much prefers his wheelchair. His eyes are very sensitive, so he keeps them closed all the time, he is also hard of hearing. Despite being rather unpleasant to look at and a bit curmudgeonly by nature, he has a sort of grandfatherly charm that has won him many friends.

When he was young, the Eldest alternately raised goats and worked in the oil fields. He knew how to shoot and care for guns, but never shot anything other than beer bottles. He no longer moves and has few relevant skills. He is a charity case, completely reliant upon a caretaker to feed and clean him. His sole remaining talent is his extreme eidetic memory: when he is lucid he can literally recall anything he has ever experienced from about the age of 5. His memory is not something that he can instantly pull details from however, he sometimes has to sift through the centuries of accumulated thoughts to find what he wants to recall.

The Eldest's most consistent possessions are his clothes and wheelchair. He usually has an assortment of knick-knacks and tchotchkes that have been given to him by various acquaintances and well-wishers.

"Quite droll, this relic. I think I should like to settle him in the corner behind the byōbu and compel stories from him at my leisure."
―Andor Arceneaux

"He's only about my favorite human being ever to walk the earth!"
―Andrew van Krammer

"A fellow loafer, good to know there's a future in it."
―Caleb Worthy

"I once saw that old coot wheel his way through a gunfight, practically skipped right through it, and once he got to where I was hold up he says, "Son, deal with this ruckus." And he then gose to the bar to demand that the bartender make him some kinda drink this rock hasn't seen in in over two-hundred years! He's a crazy old bastard but hell, his buddy was kind enough to pay me."
―Hoodlum

"The beer was cold, the Nuka bubbly, and the cows had one head. Now git, it's my nap time."
―A quick description of the Old World.

Retrieved from "https://falloutfanon.fandom.com/wiki/The_Eldest?oldid=159765"
Community content is available under CC-BY-SA unless otherwise noted.